A confined space is any area that has limited entry and exits points and is not design for long-term occupancy. Some examples of confined spaces that environmental professionals encounter are silos, pipelines, underground vaults, underground storage tanks (USTs), manholes, and pits. Apart from being hard to navigate into and out of, these areas also have a high potential for allowing dangerous gases to collect within them. Once encountered, these gases can quickly engulf and asphyxiate the entrant or present an explosive situation based on their combustibility. Due to this type potentially deadly workplace, there are strict state and federal guidelines that must be followed by anyone working within a confined space.

Since confined spaces are not always marked, the entrant must assess the situation to determine if the area fits the definition of a confined space. If unsure, you can contact any number of regulatory agencies such as OSHA for confirmation. If unable to do so, then always treat the area as a confined space and stay safe.

Safety equipment to aid in the investigations of confined spaces include tripods with safety harness that are attached to the worker for quick extraction by another worker that is outside the confined space, supplied clean air, and almost certainly a gas monitoring instrument. Some or all of these safety measures may be used depending on the situation.

Among the safety items listed above the gas monitor is the one that is of most importance and should be selected wisely. The typical configuration for a gas monitor used in a confined space is outfitted with an internal pump that pulls surrounding air across a group of sensors. The monitor is generally small, hand held, and has the ability to be clipped to a belt or lowered into the confined space before the worker enters. The gases determined to be of highest priority when monitoring human health within a confined space is oxygen (O2) and Lower Explosive Limit (LEL). Two other toxic sensors that generally accompany O2 and LEL are hydrogen sulfide and carbon monoxide based on past investigative studies into underground confined spaces. A meter configured with these four sensors is commonly referred to as a 4-Gas Meter. If other toxic gases are a possibility, toxic sensors for that particular gas may be available to install in the gas meter.

There are any number of manufacturers and models that the professional can use in these cases. Here are a few suggestions: RAE Systems QRAE II, RAE systems QRAE 3. Another option that is becoming more the norm for confined space monitoring is a 4-gas meter that also has the capability to monitor for VOCs through the use of a PID sensor. This option allows for more complete protection since the PID can detect for such a large array of toxic gases that could be present. An example of such instruments is the RAE Systems MultiRAE.

Since confined spaces present such an extreme health hazard with sometimes deadly consequences, short cuts should never be taken, the risks are simply far too great. 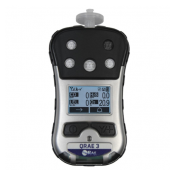 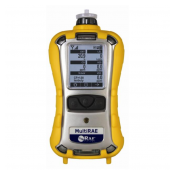 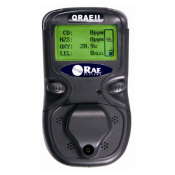